A touch of class

Welcome to the Department of General, Minimal Access & Laparoscopic Surgery at Aware Gleneagles Global Hospital, LB Nagar, Hyderabad. Minimally invasive surgery or Minimal access surgery allows your surgeon to make small incisions and cuts in your body. This surgery is considered to be safer than open surgery. This will also enable the patient to recover quickly, stay less in the hospital, and is more comfortable for the patient after they heal. We are one of the best hospitals for minimally invasive surgery in Hyderabad.

Laparoscopy is a kind of surgery that is done using small tubes and tiny cameras and surgical instruments, making one or more small incisions. This is robotic surgery that provides a magnified, 3-D view of the surgical site and helps the surgeon operates with control, precision, and flexibility. We are one of the best hospitals for laparoscopic surgery in Hyderabad.

Endoscopy is a procedure in which our doctors use specialized tools to inspect the inside organ, check for abnormalities, and take biopsies. We are one of the best hospitals for endoscopy in Hyderabad. There is a form of endoscopy called the Upper endoscopy, which is usually performed to evaluate symptoms of persistent upper abdominal pain, nausea, difficulty swallowing or vomiting. It is also the best test that will help in finding the cause of bleeding from the upper gastrointestinal tract.

General surgery is a way to perform both elective as well as emergency surgery to treat the full scale of conditions affecting the oesophagus, gallbladder, spleen, and intestines. We have an experienced team to treat all the problems related to General, Minimal invasive, and Laparoscopic surgery in Hyderabad.

Why Choose Us for General, Laparoscopic & Minimally Invasive Surgery?

We are one of the best hospitals for minimal invasive surgery in Hyderabad and provide our patients with the best treatment available. We have among us the best doctor in Hyderabad to perform the surgeries. At Aware Gleneagles Global Hospital, the Minimal Invasive Surgery team has vast experience in such innovative procedures that can help reduce patients ‘ period in the hospital, minimize surgical bruising, and return patients to their daily activities.

Aware Gleneagles Global Hospital provides quality care and meets the needs of patients. The care given by us is accessible, cost-effective, and comfortable. A solid infrastructure is well suited for the hospital. It has a well-kept team that conducts different tests linked to minimal invasive surgery. Senior doctors are training the staff and providing patients with the best service.

Being among the best hospitals for laparoscopic surgery in Hyderabad and the best hospital for endoscopy in Hyderabad, we provide you with all the medical assistance for the best treatment for you. We make sure that you never have any doubts about the medication we provide. We have the most experienced doctors and specialists to give you expert advice when you have any confusion regarding any matter. We have grown continuously and evolved to meet the needs of the families we serve. We are amongst the best hospitals for endoscopy in Hyderabad. Our department’s advantage is that, that we not only provide care and treatment but also promote preventive care by educating them about periodic comprehensive health check-ups.

We develop a diagnostic and treatment plan catering to the needs of the surgery. And once we are satisfied with it, we facilitate further evaluation and treatment with the broader team. Being amongst the best hospital for endoscopy in Hyderabad, we make sure that we coordinate and communicate well with the staff and doctors of our hospital so that nothing is compromised in giving the best treatment. Also, being one of the best hospitals for minimal access surgery in Hyderabad, we have world-class doctors to provide the best and comprehensive diagnosis for the treatment. We aim to better the health of our patients by modelling the best health treatment plans and executing the same with the help of the best medical facilities. Being one of the best hospitals for laparoscopy in Hyderabad is what motivates us to push ourselves to give out the best.

Our hospitals have been developing every year and have various technologies to diagnose any and every laparoscopy and endoscopy problems. We have been improving ourselves to provide you with the most updated technologies and give the best treatment possible.

Breast Surgery: Being among the best hospital for breast surgery in Hyderabad, we provide comprehensive treatments for any breast disease and breast cancer. We provide you with various treatment options, such as:

Colorectal Surgery: We specialize in the treatment of disorders that affect the gastrointestinal tract. We are one of the best hospitals for colorectal surgery in Hyderabad. Some symptomatic procedures which we provide are:

GI/Endocrine Surgery: We are amongst the best hospital for GI/Endocrine surgery in Hyderabad and we treat disorders of the adrenal, thyroid, and parathyroid glands. Some of the treatments are:

General Surgery: General surgery is a way to perform both elective as we ll as emergency surgery to treat the full scale of conditions affecting the oesophagus, gallbladder, spleen, and intestines. Being amongst the best hospital for general surgery in Hyderabad, we provide treatments such as:

Hernia Surgery: We provide surgeries for various hernia problems like complex inguinal, umbilical, and ventral hernias, including primary and recurrent hernias and hernia that were previously considered irreparable. We are one of the best hospitals for hernia surgery in Hyderabad.

Vascular Surgery: We provide specialized treatment for patients suffering from vascular diseases such as Aortic disease and Arterial and Venous Disease. We are amongst the best hospital for vascular surgery in Hyderabad, and are trained in the latest endovascular technology as well as open surgical techniques.

Cholecystectomy: Gallbladder disease may be of various kinds, depending on which part of the biliary system is affected. Some of the common variations include:

Hernia: An opening or weakness in the abdominal wall is called hernia. This often results in soft tissue such as fat or intestine protruding through the abdominal muscles. It occupies space under the skin.

Spleen: The spleen is an organ located in the left upper part of the abdomen. It is part of the body’s immune system, helping to fight infections — especially infections caused by bacteria. It plays a significant role in the development of blood cells, and it also helps to remove old blood cells from the bloodstream.

Treatments for Gastroesophageal Reflux Disease (GERD): Gastroesophageal reflux disease (GERD), also called acid reflux, is a common digestive disorder in which stomach contents regurgitate (reflux) into the oesophagus. It is also called as heartburn; GERD often causes inflammation and damage to the oesophagus and sometimes to the lungs and vocal cords.

The Department of General, Minimal Access and Laparoscopic Surgery at Aware Gleneagles Global Hospital, Hyderabad, has some of the best set of doctors, surgeons, and specialists who specialize in different forms of surgeries. We have some of the best doctors for minimal invasive surgery in Hyderabad on board to give expert medical advice, which you require. They are well-trained and have an excellent knowledge of their work and specialization. They excel in their fields and. We are one of the best hospitals for minimal invasive surgery in Hyderabad and make sure that our patients have a satisfactory journey of treatment here. Being amongst the best hospital for laparoscopy in Hyderabad, we can assure you that you will be in great hands and will have a very comfortable journey to recovery. Having some of the best laparoscopic surgeons in Hyderabad on board, we will provide you with expert opinions for every type of disease that you are going through. We are also known for being amongst the best hospitals for endoscopy in Hyderabad. 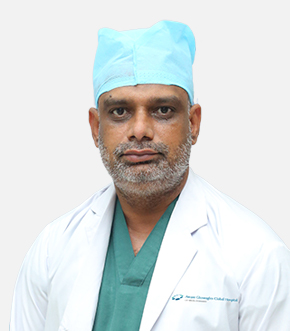 What is Minimal Access Surgery or Minimally Invasive Surgery?

Minimally invasive surgery or Minimal access surgery is a surgery where a surgeon makes small incisions and cuts in your body. This surgery is much safer than open surgery as it enables the patient to recover quickly.

What is Laparoscopic Surgery?

Laparoscopic Surgery is done using small tubes, tiny cameras, and surgical instruments, by making one or more small incisions in your body. This is robotic surgery that provides a magnified view of the surgical site and helps the surgeon operates with control, precision, and flexibility.

We are with you in your journey to better health

A consultation with our panel of doctors, specialists and surgeons will help you determine what kind of services you may need to help diagnose and treat your condition. If you or someone in your family or friend’s circle are facing any health issues, please get in touch with us, we are here for you.

By submitting the form, I accept the Terms & Conditions of usage of the data and consent to the same. I am aware that the information on this form will be sent to Gleneagles Global Hospital and will be used in accordance with their user consent & data usage policy & privacy policy. I am also aware that the data may be used for further use including remarketing.